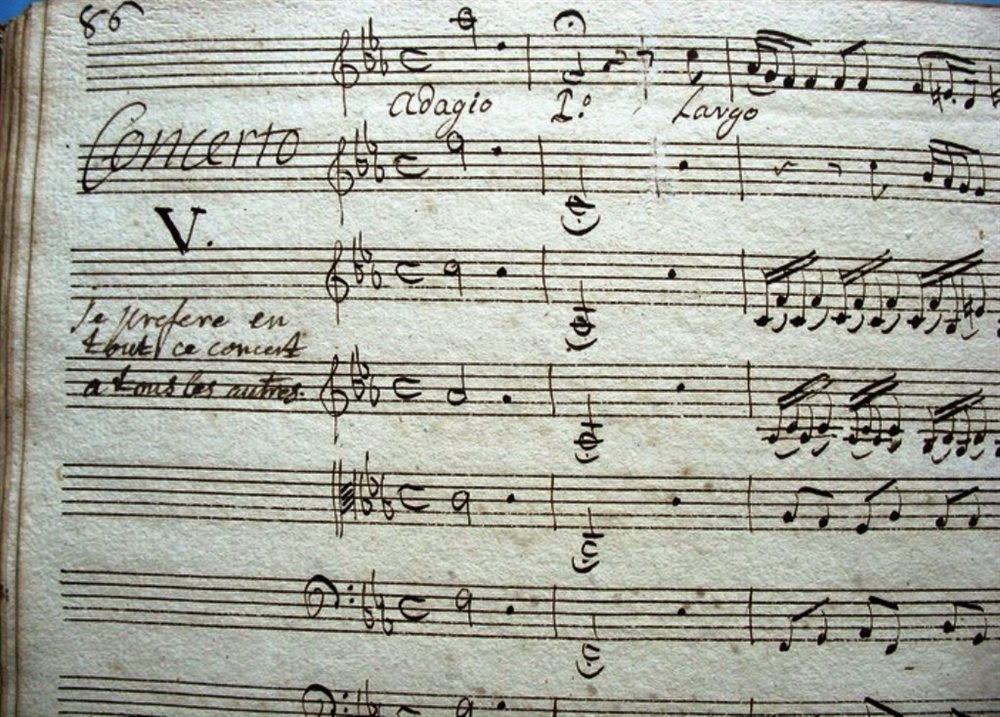 Believe it or not, there was a time before intellectual copyright law, and misattribution used to be a big problem, not the least in classical music.  The most famous case is most likely the trumpet voluntary Prince of Denmark's March, often just called Trumpet Voluntary, which was long attributed to Henry Purcell but was in fact written by his younger contemporary Jeremiah Clarke - the confusion arose from a late-19th-century organ arrangement.  More salacious are cases where an unknown composer simply published their work under another composer's name, and no composer was more of a victim of this than Giovanni Battista Pergolesi.  After his death at 26 (ouch!), dozens of works were either published under the name Pergolesi or incorrectly stuffed into his oeuvre by unwitting scholars, and so prevalent was this issue that most of the pieces Stravinsky used for his ballet Pulcinella under the presumption that they were all Pergolesian were written by other composers, including the man we're talking about today.

The "Tarantella" movement of the Pulcinella Suite was based on the final movement of the fifth Concerto Armonico in B-flat major, part of a series of six Concerti Armonici for strings and continuo by an author who was initially anonymous upon their publication in 1740.  The idea was put forth that they were written by the violinist Carlo Ricciotti, but the Polish composer Franciszek Lessel asserted that they were written by Pergolesi, a misconception that lasted until 1980.  That year, a book was published by musicologist Albert Dunning that proved that the Concerti were written by a Dutch nobleman by the name of Unico Wilhelm van Wassenaer, which admittedly doesn't roll of the tongue like Pergolesi, but the discovery was made by the author when he visited the castle Wassenaer grew up in and found a manuscript of the Concerti, written in Ricciotti's hand, with a revealing foreword.  As it turns out, Wassenaer requested that his name be left off the pieces upon publication, a decision whose explanation is both frustrating and, oddly enough, tacitly inspiring, but before we talk about the whys I must assert evidence that the Concerti Armonici are the best pieces of music anybody ever tried to take their name off of.

Cast in a four-movement slow-fast-slow-fast church sonata format and following the Roman-Neopolitan concerto practice of using four different violin parts, the Concerti are masterpieces of their time.  Wassenaer must have studied deeply and worked very hard on these works, as they show an extraordinary gift for contrapuntal and harmonic richness.  It's hardly not worth talking about them as their high quality is self-evident, some moments almost shocking in their beauty.  Wassenaer had a special taste for deep pedal points and layering motives, weaving cells together in rapturous euphony like flocks of birds over immense canyons.  If it seems my adjectives are a bit over-the-top I'd argue that the music sparks grand emotions, a truth that turns odd once you know why Wassenaer wanted to remain uncredited for their composition.

Wassenaer's foreword with the manuscript mentioned that Ricciotti, the first violinist for the Concerti's first private performances, insisted that the pieces be published, and that only with the insistence of their ultimate dedicatee Count Willem Bentinck did they come to print, and only under the condition that Wassenaer's name be stricken from the record out of his own shame at their existence.  One source I read claimed that Wassenaer felt that it was unbecoming of a nobleman to have to "peddle his wears", so to speak, but Wassenaer's own words in the foreword are more revealing:

"Some of them are tolerable, some middling, others wretched. Had they not been published, I would perhaps have corrected the mistakes in them, but other business has left me no leisure to amuse myself with them, and I would have caused their editor offence."

That's just insane.  Never before have I heard such damning words attached to an artist's own work in contrast to such high quality, not even in famous cases of regretful authors like Thomas Pynchon and The Crying of Lot 49.  I suppose there have been more extreme cases, such as Franz Kafka's wish that all his unpublished works be burned after his death, but I can see no reason for these pieces to be deemed so unsuitable as to be orphaned.  It's not like the authorship of Primary Colors where the content of the piece is scandalous and dangerous to its source.  It's not even like Hypnerotomachia Poliphili, the incredible early Renaissance allegorical novel written by a Franciscan priest, because at least there's a tradition of the clergy shunning their own contributions to art out of humility to God.  Sure, Gerard Manley Hopkins destroyed all his early poems when he joined the clergy but he at least got back to work after that whole humility thing blew over.  In fact, if there's any other work this case reminds me of it's - and bare with me - American History X.

For those who don't know, American History X is a really dang good movie starring Edward Norton as a Neo-Nazi who goes to jail for curb stomping a black man and turns away from racism in jail, only to get out and do his damndest to keep his little brother Edward Furlong from going down the same path.  Well-directed by Tony Kaye, Kaye claimed that Norton took the movie away from him and edited it in a way to put in as many shots of himself as possible, but was denied the right to release the movie under a pseudonym (which would have been "Humpty Dumpty", by the way) after doing interviews blasting the studio's decision to release the mucked-with version.  Upon its release, Roger Ebert called it the best movie anybody ever tried to take their name off of, and without better evidence I'd be inclined to agree.  That being said, Kaye did have legitimate concerns that the movie was no longer his, and apparently the workprint version and the final film do feel completely different (though I've never seen it), which is more reason to be fearful than Wassenaer's.  Seriously, did you hear these things?

I'm making my official vote for the Concerti Armonici being the best pieces of classical music anybody tried to publish anonymously, and I get the feeling that I'm not the only one, as once the pieces were reprinted with proper attribution a number of recordings popped up, including the ones featured here by the excellent Canadian string orchestra I Musici de Montréal under the direction of Yuli Turovsky.  These performances milk every exquisite harmony and timbre out of the scores and have the power to renew one's faith in the bridge music between the Baroque and Classical eras - after snatching this CD from the clearance rack I certainly realized it'd been far too long since I'd taken a dip in Enlightenment waters.  The Concerti Armonici would be stunning no matter who wrote them but thanks to Dunning's discovery the classical community has finally gotten around to honoring the name of an unknown master, and if that's not a happy ending I don't know what is - except for the last movements of the Concerti.

Peter Nelson-King
I'm a musician, writer and researcher working near Seattle, and these blogs are a way for me to expound on great art that is sadly forgotten (or was never known in the first place). I write on movies (view-from-the-paperhouse.blogspot.com), classical composers (re-composing.blogspot.com), one-page classical pieces (forgotten-leaves.blogspot.com), non-classical music (dregs-of-the-earth.blogspot.com), stuff I got for a penny on Amazon (penny-for-their-thoughts.blogspot.com) and sorts of stuff (sorts-of-stuff.blogspot.com). Please suggest stuff to me, because if anybody knows more about unjustly obscure art it's everybody else ;).

Study the Greats, My Boy